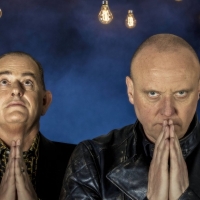 Two years after Heaven 17 marked the 30th anniversary of their breakthrough record Penthouse and Pavement with a live tour, the Sheffield duo of Glenn Gregory and Martyn Ware are celebrating the three-decade mark of the follow-up album, 1983's The Luxury Gap.

Eclipsing the debut, The Luxury Gap reached No 4 in 1983, turned Platinum in the UK and was a hit all over the world. With a lighter touch than their debut record, The Luxury Gap proved to be more chart-friendly and spawned some of Heaven 17's most popular hits including the enduring, frequently-revived and remixed Temptation. It was a No 2 hit in 1983, returning to the top five nearly a decade later, courtesy of a Brothers in Rhythm remix.

But The Luxury Gap was more than merely a vehicle for a few hit singles; it was a landmark in synth-pop and the Heaven 17 story. Thirty years on, and after an October 2011 Roundhouse gig which saw the record played live in its entirety for the first time, the pair are taking the album on the road with a series of autumn 2012 gigs.

The Luxury Gap Tour kicks off at the O2 Academy in Liverpool on Tuesday 23rd October, followed by dates in Glasgow, Newcastle and more, before the final gig of the run at the O2 Academy2 in Oxford on Friday 2nd November 2012. We will have tickets available from 9am on Friday 23rd March, priced around £20.

Ahead of the autumn dates, Glenn and Martyn have a busy summer of festival appearances including the brand new MFest 2012 near Leeds on 8th July (tickets available now priced £25) and, a week later, at the Mouth of the Tyne Festival 2012 - we've Premium tickets available now.

There are also May dates in Cookham and Hatfield, appearing alongside other 'revival' acts including Billy Ocean, Go West, ABC, Howard Jones, China Crisis and Toyah. Follow the links below for tickets.