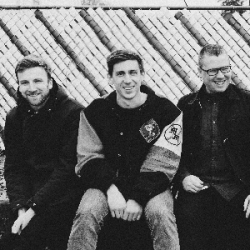 Armed with one of rock music's most memorable monikers, Scotland's robust and resilient young pups, We Were Promised Jetpacks, haven't had many problems garnering press attention, be it favourable or indifferent (mostly the former) - you couldn't get them mixed up with fellow compatriots The Proclaimers, for example.

Formed almost 10 years ago, WWPJ earned their first acclaim by winning a school 'battle-of-the-bands' competition. They made the move from Edinburgh to Glasgow, became of legal drinking age and earned a support slot for future and not-dissimilar label-mates, Frightened Rabbit in 2008. NME and the like soon started to sit up and take notice and by 2009, the band had issued their debut album 'These Four Walls'. Fan numbers have grown since then and second album 'In the Pit of the Stomach' has shown the Jetpacks to be a highly competent and vibrant musical proposition. Have a listen to the lead-off single 'Medicine' - it's a belter.

Gig-wise, the lads have been neglecting their homeland for a while, a state of affairs set to be remedied with the announcement of half-a-dozen Scottish shows in late spring. The lucky towns confirmed for their first sizeable north of the border shows since early 2011 include Dundee on 23rd May, followed by Aberdeen, Inverness, Dunfermline, Stirling and finally Coatbridge on 1st June. Ticket prices are a pocket-friendly £7. Naturally, being on home turf, you can expect tickets to sell pretty sharpish.