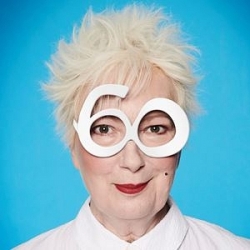 Jenny Eclair has a reputation for cheeky straight-talking comedy that looks (and occasionally pokes) you right in the eye. Having trained as an actress, she first appeared on our screens in The Bill (who hasn't) before moving onto a career in stand-up. It is fair to say that she's never looked back.

In 1995, Eclair became the first female comic to scoop the prestigious Perrier award at Edinburgh. She soon built a reputation as an extraordinarily likeable, warm and funny comedian with filthy mind. Like a favourite aunt who insists on telling dirty jokes and who'd you tell to quit it if you could only stop laughing long enough to catch your breath.

Despite the 1995 Fringe gong, like so many women, Eclair has got better with age. These days, the distinctive spectacles and platinum blond hair still do nothing to diminish the mischievous glint in her eye as she frequents our television screens as one of the Loose or Grumpy Old Women we see so much of. There's been more straight acting, plenty of radio and stage work and also writing. But stand-up remains her most natural arena and, thankfully, Jenny Eclair is once again hitting the road this autumn to do what she does best with the 38-date Eclairious tour.

The tour kicks off in late September, preceded by a handful of warm-ups. The main tour takes in a huge range of venues in the run-up to Christmas, including Brighton, Derby, Durham, Salford and lots more.

We have tickets available now for the warm-up shows, priced around £10, and priced from £17.50 for the full tour.