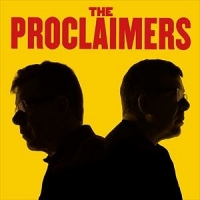 Identical twins, Charlie and Craig Reid, have been quite a formidable force since their introduction to eager home-turf audiences almost 30 years ago. The Hibs-supporting pair only came to prominence after the ironic, lyrical pronunciation-sideswipe 'Throw The 'R' Away' was unleashed as a debut single in 1987. You see, The Proclaimers don't do BBC-style accents, they growl with gruff Caledonian vowels and holler with a Leith burr that could baffle most lazy ears south of the border (that's the M25, by the way).

But it hasn't stopped them from reaching a wider audience, though with little owed to radio stations who struggled to play anything other than mega-hit 'Letter From America' and the by-now ridiculously-famous walking anthem, 'I'm Gonna Be (500 Miles)'. If you've not walked the West Highland Way with that blasting through your earholes, you haven't lived - it is a 'stayer', shall we say, even when adapted for 2007's Comic Relief (it featured the 'wheelchair-bound' characters, Brian Potter (Peter Kay's Phoenix Nights) and Andy Pipkin (Little Britain's Matt Lucas).

What sets the Reids apart from the Gallaghers of this world is mutual respect and compatibility - you somehow imagine that they've really enjoyed their life together, writing and performing some truly special music along the way. Listen to their Top 10 'Sunshine on Leith' album, front-to-back, and I dare you to not at least suffer 'tremble-lip' during the title track or their cover of Hank Williams' 'My Old Friend The Blues'. *grabs tissue.

And so 2012 sees album number nine hit the shelves and servers in May, possibly another Top 30 contender - called 'Get Comedy', the last laugh has certainly been aimed at The Proclaimers' fiercest critics (mostly from England - possibly). Later this year, the twins will promote the album with a massive six-week jaunt that is considerably longer in mileage than their biggest hit suggests.

First stop on their tour (after festival slots at V Festival 2012, Hebcelt 2012 on the Isle of Lewis and Cambridge Folk Festival) is King's Lynn on 16th October, followed by St Albans, Shrewsbury, Bristol, Shepherd's Bush and tons more, before they head up to their homeland for partisan shows in Glasgow (two nights), Aberdeen, Inverness, Perth and finally, for two nights, Edinburgh on 22nd and 23rd November. Tickets cost from £26.50 and are on sale for some gigs from Friday 9th March at 10am, with the remainder on sale from Friday 16th March.