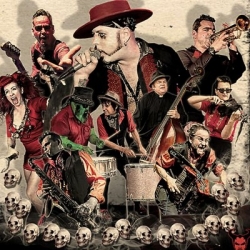 Although 'voodoo' might not be immediately representative of Paul-Ronney Angel's London-based collective, 'machine' certainly is. At their most slender, the Urban Voodoo Machine still pack a nine-man punch, swelling to a dozen or more for one of their legendary live shows.

When they swamp the stage, it's like a fire drill as all the whirring parts align themselves for their latest roll call in preparation of another assault on the senses. And it can all get a bid mad. A kind of dark cabaret, the Urban Voodoo Machine features a mind-souping array of instruments, not of all which began life as such. There are of course guitars, drums, trumpet, harmonica, banjo, accordion, washboard and a whole host of eclectic musical noise pieces, but then there are also the gongs, the chiming empty bottles and the converted tie rack (that's 'tie rack').

It is a dizzying, infectious blend and live it is a sight (and sound) to behold. The Machine have been offering a taste of their unique flavour at the hugely successful monthly London club night Gypsy Hotel since 2006 and, if you're still in any doubt about their intoxicating appeal, they've also announced a clutch of UK gigs to launch the summer in style.

The Urban Voodoo Machine kick off their summer in late May with gigs at Nottingham's Rescue Rooms, then onto Glasgow, York, Manchester (Ruby Lounge) and the Islington Academy, before the final date announced so far at Bristol Tunnels on 6th June 2012.

We will have tickets available a day ahead of general on-sale (which is Friday), from Thursday 8th March at 9am, priced from £12.50.