Posted: 2nd March 2012
First few dates of the UK/Ireland tour rescheduled due to illness - all shows set to take place, though 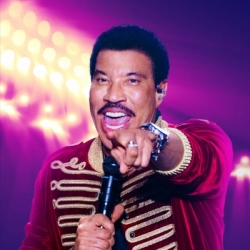 A decade or so ago, Lionel Richie was, unbelievably, becoming known to a new generation as little more than the adoptive father of paparazzi poster girl and occasional car crash, Nicole Richie.

However, for anyone over 30, he was fondly remembered as one of the biggest R&B and pop artists of all time, a crown he seems to have regained in recent years with his 2006 album 'Coming Home' peaking at No 6 in the US. 'Coming Home' was his biggest album in 20 years but, for Lionel aficionados, very few tracks from the last two decades will feature that prominently on Spotify playlists.

His heyday was, without doubt, the seventies and eighties - first with The Commodores and then as a hugely successful solo artist. His second album, 'Can't Slow Down' was his most successful, the 1982 release topping the charts in the UK and US, selling 15 million copies and spawning worldwide smash hit singles 'All Night Long', 'Hello', 'Running With the Night', 'Penny Lover' and 'Stuck on You'. No eighties disco wind-down was complete without a Lionel slowie.

But, young Nicole's famous parentage does hint at Richie Senior as something of a dynastic presence. He has collaborated with some of music's biggest names, not least Diana Ross (on 'Endless Love'), his aunt is Sheila E (multi-talented musician and most famous as Prince's beloved drummer) and his alma mater was The Commodores. The man is a pop God.

So, when he announced he was to re-imagine and re-record some of his most famous songs and duets, this time with country singers, some of that genre's most famous names formed an orderly queue. The result was his album 'Tuskegee', released in the UK on 12th March, which features collaborations with artists including Shania Twain, Kenny Rogers, Willie Nelson and Jimmy Buffett.

Lionel Richie is bringing 'Tuskegee' and his staggeringly successful and influential back catalogue to the UK with an arena tour in the autumn, which takes in arena gigs in Belfast, Glasgow, Birmingham, London (The O2), Liverpool, Manchester and more, before the final date announced so far at the Motorpoint Arena in Sheffield on 17th November.

Originally due to start in Dublin on 24th September, the UK/Ireland tour now kicks-off in Birmingham on 26th October, with Dublin, Belfast, Aberdeen, Glasgow and Nottingham now rescheduled and taking place at the end of the tour (10th to 15th December).

The dates were rescheduled due to an illness the singer contracted. Tickets remain valid for all rescheduled shows, but anyone that can't make it should contact their point of purchase for a refund.