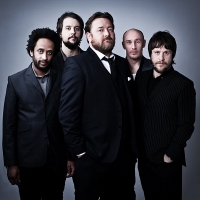 Is there anywhere in the UK where there hasn't been a live concert? Apart from my local Nisa and Spar, pretty much every public building or commercial site has had at least one consideration for a live concert, at some point at least. Live from Jodrell Bank, organized by those lovely Kendal Calling bods, is a unique series of live concerts from big names, all performed under the formidable shadow of Lovell's telescope, a major Cheshire landmark for over 5 decades. Lovell's Telescope (set in a rural heartland, several miles from Crewe and Macclesfield) is the world's third-largest active radio-telescope and is used to seek out the secrets of our universe, including distant planets and stars.

Talking of stars, we really should talk about the music. The first confirmed names for this year's series of unique concerts are Elbow, set to play on 23rd June, and Paul Weller, who will perform on 24th June. Both nights will feature special guests (yet to be announced) and tickets for both shows will go on sale from Thursday morning at 9am, priced at £35 per day.

Elbow's year appears to involve festival and one-off appearances, after last year's successful touring schedule. The ironically-titled "Build a Rocket, Boys!" is sure to be a success underneath Jodrell's space-age structure, as well as their other magical catalogue. Paul Weller is also sticking to the theme of space-age 'transmitting' with his album "Sonic Kicks", due out on 26th March.

More special guests and other Live from Jodrell Bank shows will be announced in due course - meanwhile, set the PC controls for planet Allgigs on Thursday morning - these tickets will sell pretty quickly!