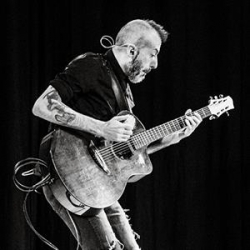 Aficionados of note-perfect musicianship and guitar-playing masterclasses are rarely treated to three such luminaries on one bill, at the same time and on a full UK tour - but it's true in this case.

As part of the ongoing Guitar Masters Tour, the UK leg brings together the legendary star behind the instrumental track and YouTube success, 'Drifting', a stalwart of the two-handed playing technique and an English virtuoso who has a reputation that extends around the world. Andy McKee, Preston Reed and Jon Gomm will be touring the British Isles during the autumn, playing at a variety of venues throughout most of September and October.

McKee is well-known for his 'Drifting' piece, as well as the multi-layered rendition of 'Everybody Wants to Rule the World' (Tears for Fears) and his recent album, 'Joyland'. Close your eyes and you could be listening to two or three guitarists at once, open them and you see McKee, looking like John Peel's twin and deftly bouncing his fingers around the guitar fret, like he was playing 'Patience' on his iPad.

If you're not just a bit impressed, you need head surgery - see what we mean on his YouTube channel: www.youtube.com/user/AndyMcKeeVEVO

One of McKee's key influences will be accompanying him on the tour - Preston Reed has been developing his unique double-handed playing style since the late '80s, in turn citing Leo Kottke as an influence, although Reed's first releases date back to the late '70s. He's issued over twenty albums, including his last jazz-tinged album, 2007's 'Spirit'. Like McKee, Reed can fill the room with an entire band, yet still be just one man who can play a guitar with most of his upper body. Finally, comparative youngster Jon Gomm has previously covered Radiohead and Bob Marley, as well as citing Michael Hedges as an influence. Quite a player. Put the three together and you have quite a show.

First stop on the UK tour is Folkestone on 12th September, followed by Brighton, Farnham, Wimborne Minster, Exeter and many more, including Edinburgh and Leeds, before concluding in London at the Union Chapel on 7th October. Tickets cost from £17.50, depending on location. Unmissable.