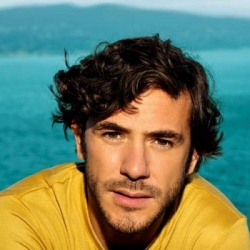 Hands up who isn't familiar with that name up there, Jack Savoretti. Nope, me neither - or, so I thought. Swift detective work involving websites and Wikipedia didn't give a whole lot away (possibly written by a PR company), although many of his previously-released songs have appeared in various episodes of Grey's Anatomy and One Tree Hill. Ah, the penny drops.

So, apologies to the singer who has previously had a chart-album with 2007's "Between the Minds" (which we gave 5 stars to, incidentally), and a minor hit-single ("Without"), let's set about making amends. With his second album "Harder than Easy" failing to raise the proverbial roof, Savoretti returns with a clutch of new songs, one of which, the silky ballad "Hate and Love", features the dulcet tones of a certain Sienna Miller. Clearly, the silver screens have given the singer a muse and some poignant inspiration. Far more perky is the recent single, "Knock Knock", which you can hear on the embedded player in this article. See? You might need to get to know this fella - he could be a contender.

In support of his upcoming and, as yet, untitled third album, Jack Savoretti will be on the road during late spring, starting in London (Central) on 31st May and followed by Edinburgh, Aberdeen, Newcastle, Belfast, Dublin, another small gig in London (West) before calling in Brighton on 21st June.

We will have tickets for these shows from 9am tomorrow morning, Friday 24th Feb. Prices are no higher than £10, so get in quick!