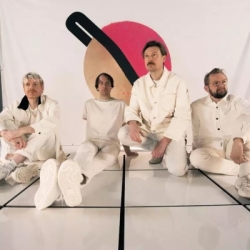 After watching the BRITs last night, you might either be wide-eyed and wondering at the sheer weight of talent the UK has to offer, or you'll be cross-bowing your loved ones in sheer frustration. It wasn't all depressing of course - PJ Harvey got nominated, as did the Queen of Pop (Kate Bush, not Pixie Lott) and you have to agree, Adele's got a fair set of (repaired) tonsils on her. But, a lack of exciting bands certainly has been the order of the day for far too long and, while every music blogger and writer struggles to find 'the next big thing', the less-than-bothered public continues to aurally graze on pap. More fool them.

Django Django's music probably won't have people exclaiming the band as rock's saviours, but their debut album promised much and ultimately delivered, all on the strength of a small clutch of songs and a big reputation. 'Django Django' might not be the most imaginative title for your inaugural flight into uncharted musical skies, but the tracks themselves are an immersive blend of twitchy rhythms, cerebral lyrics and intricate melodies. If Talking Heads, Gruff Rhys and Field Music bumped into each other on the way to a Beta Band concert, they might all come away with something similar to what these young Scots have been making.

'Hail Bop', 'Life's a Beach' and 'Default' (embedded in this article) are busy enough little anthems that might tickle your toes off, especially when played on stage, very loud, something you may be lucky enough to experience if you grabbed a ticket for their current UK jaunt, which has sold out (unsurprisingly, given the press reviews for said opus).

Your next chances to see Django Django are during the summer with either a choice of festival slots - Field Day, No Direction Home and Parklife Weekender - or on their next string of headliners. First stop for their tour is Southampton on 31st May, followed by Oxford, Birmingham, York (on sale now) and more until Cambridge on 15th June. All cost around £8.50 and we'll have tickets on sale from Friday at 9am.

In addition and also on sale from 9am Friday is a show at London's Heaven on 31st October - £12 will be the asking price for that one.