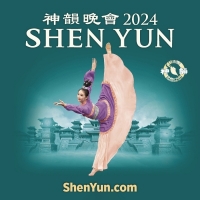 Anyone who's ever witnessed the colourful pageant and traditional Chinese New Year celebrations will be familiar with the Dragon Dance, often performed as the centrepiece of a procession in the belief that the dragon represents a method of healing and the gift of supernatural powers, goodness, fertility, vigilance and dignity. Other examples include the Lion Dance and various regional dances which involve teams of people or individuals.

Throughout the history of Chinese culture, music, poetry and dance have played a significant part in the evolution of its dynasty, not least by the dozens of renowned troupes based not just in China but right across the globe. Shen Yun rates as possibly the most important modern company dedicated to continuing the 5000 year-old traditions of a country that has seen much change in recent years, including becoming the fastest growing economy in the world.

Coming up at the London Coliseum during April is a week-long residency from Shen Yun, which promises to be a magical, mesmerising and hypnotic event for all ages. Resplendent with dazzling costumes, poetic arrangements and majestic orchestral scores, Shen Yun's production will feature over 90 dancers and musicians and an array of animated backdrops. This all sounds seriously essential entertainment.

Tickets for the show, which runs from 12th to 15th April, cost from £30 for Balcony seats, £40 to £60 for Circles and up to £100 for Stalls - they're already down to the last few dozen for each section, therefore we advise you take the plunge and buy now!