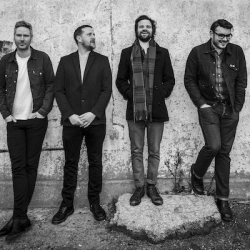 It wasn't all that long ago that the city of Sunderland's contribution to popular music amounted to little more than Deep Purple's Don Airey, Kenickie's Lauren Laverne and Mark from Moloko.

But times have changed. Two of the city's brightest musical prospects are currently making waves across the indie scene; the trend-bucking art rockers of Field Music and the stripped-down skiffling indie pop of Frankie & the Heartstrings. But the first Mackems to raise the NME's eyebrows in the new century were The Futureheads, not least with their 2005 cover of Kate Bush's 'Hounds of Love'.

'Hounds of Love' appeared on the band's eponymous debut album which made the UK Top 20 in 2004, as did follow-up 'News and Tributes' in 2006, the title track of which was dedicated the memory of those who died in the 1958 Munich Air Disaster. Twelve years and four studio albums since forming, The Futureheads are taking a brave new direction (for now) to keep things 'fresh'; a direction hinted at in the opening strains of 'Hounds of Love' seven years ago.

The new record is an all-vocal offering, with the 11-track 'Rant' released on 2nd April, the day before the strictly acoustic and a cappella tour begins. You can hear a sneak preview of the vocal reworking of 'Robot', as featured in 'Rant', above.

The April tour kicks off at Bristol's Colston Hall on the 3rd, followed by Islington's Union Chapel and dates in Leeds, Glasgow and more, before the final gig at the Royal Northern College of Music in Manchester on 13th April, with support coming from vocal harmony group The Cornshed Sisters.

We will have tickets available when they go on sale at 10am on Tuesday 21st February, priced from around £15.