Posted: 18th September 2012
The New Yorker will appear at the London Aquarium to close her September and October UK tour, tickets on sale now 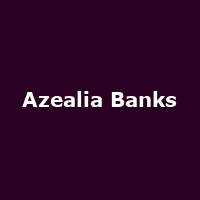 It's certainly true to say that 2012 is still about the '212' - the controversial potty-mouthed track by Harlem's Azealia Banks has racked up over 30 million hits on YouTube and rising. With subtle lyrics such as 'You could see I been that bitch since the Pamper', 'She wanna lick my plum in the evening' and 'I guess that ***t getting eaten', you're in no two minds about her angle and subject matter. Clue: it's not a song about market gardening (pardon the innuendo).

Ms Banks's notoriety seems to stretch way further than her full-frontal lyrics - her first foray into the music business fell flat after falling out with the XL label, prompting her to 'go it alone'. After a few YouTube hits, the biggie came with '212', adapted from Lazy Jay's 'Float My Boat', although in an age where chart placings are irrelevant, the single only reached #75.

The tour kicks off in Manchester on 28th September, followed by dates in Newcastle, Liverpool and several more until Shepherd's Bush on 12th October. We will have tickets available now all for dates, priced £12.50 except Shepherd's Bush, which is sold out.

The Mermaid Ball follows similar events in New York and Los Angeles and takes place at the London Aquarium on Saturday 13th October. We have tickets available now, priced £25.