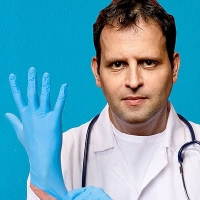 One evening in the late eighties, when I was about 14, I was watching a rented video of the film Fatal Attraction. With my dad, nan and grandad. Just as Michael Douglas was once again feasting on Glenn Close's naked body, all revealed in startling close-up, my nan commented: "I told you it was a sexy film".

Two things. Firstly, she didn't (tell me), that bit was in her head. Secondly, and more importantly, her comment did nothing to dampen the extraordinary awkwardness of the moment. I guess she was just trying to break the uncomfortable silence. The point is, Fatal Attraction may have carried an 18 certificate but there were no clear warnings that my 72-year-old Nan would find it a 'sexy film'.

One of the glorious things about Adam Kay's Smutty Songs is that there is little room for any doubt. If you take your nan along to see Adam sing his re-imagined pop songs, rich in toilet humour, you both will be getting exactly what you expected.

And that is clever, very funny songs from a practising doctor, which poke fun at medics, deploy very colourful language to devastating comic effect and generally make audience's sides hurt. Something Adam, who is one half of the duo Amateur Transplants with Dr Suman Biswas, will be doing again in the spring when he embarks on a huge tour.

The dates begin in late March and take in Glasgow, Bath, Coventry, Salford, Croydon, Derby, London (Bloomsbury Theatre) and more, before the final date of the tour in High Wycombe on 7th June 2012.

We have tickets for some shows available now but most go on sale at 9am on Monday 13th February, priced from around £16.