Martin Stephenson and the Daintees sail the Boat to Bolivia, via the UK for a 2012 Tour! On sale Friday 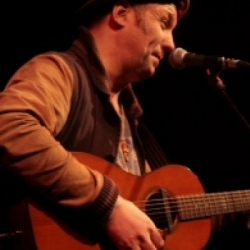 During the mid '80s, many bands and singers took to the curious practice of donning hats for photo shoots and live appearances. David Bowie, Haircut 100, Spandau Ballet, Marc Almond and many more were all guilty of endearing themselves to the man/woman-in-the-street by getting a bit casual. I blame Kevin Rowland and his Dexys dustman look, myself. Still, it mattered not a jot if the music was good and the quality was sustained.

Martin Stephenson also adopted the flat-cap-perched-at-a-45-degree-angle fad, though thankfully he looked a darned sight less ridiculous than certain other milliner-friendly pop stars of the time. The dapper songwriter could certainly show current pseudo-folkies a thing or two, partly due to his Sunderland roots - you can get away with it in the North East, not the Surrey Downs. Fashion assessment aside, Stephenson has also been one of the finest, yet largely ignored, songwriters the UK has ever produced. 'Pourquoi?', you may ask.

Initially, Martin and his backing band, The Daintees, were signed to fledgling indie-heavyweight label Kitchenware Records, a veritable hot-house of upcoming talents such as Prefab Sprout (before they embraced 'hot dogs and jumping frogs', although the label continued as a CBS imprint for the duration), Hurrah! and recently as a revived stable for Editors and Kate Walsh. In short, Kitchenware was a label of some songwriting distinction.

The band's first full album is the subject matter of his next UK tour, with The Daintees in tow. 'Boat to Bolivia' demonstrates perfectly just how skilled Stephenson was at throwing down impassioned and heartfelt lyrics onto layers of rootsy, bluesy, rocky, poppy music. Key songs include, well, just about all of them from his inaugural foray into recorded-sound. 'Crocodile Cryer', 'Coleen', 'Running Water' and 'Slow Lovin'' are sumptuous - and you really ought to see and hear them performed as soon as possible.

Thankfully, you can do this by heading to one of the 'Boat to Bolivia' shows in April. First stop is Glasgow on 6th April, followed by a string of dates covering Leeds, Liverpool, London etc until the last show in Bristol on the 16th. We'll have tickets available to buy from Friday morning at 9am, priced at £19.50 (£23.50 for London). Don't underestimate demand for this tour - Martin Stephenson treads hallowed ground in songwriting circles and could well sell out a few of these, especially the Union Chapel show on 13th April.