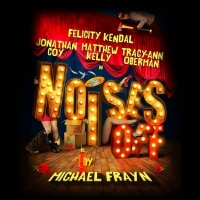 Tickets to see the Old Vic production of Michael Frayn's 1982 farce Noises Off have been hard to come by, with only a smattering of premium tickets remaining for the run which ends on 10th March.

The combination of Frayn's razor-sharp script, Lindsay Posner's direction and an irresistible cast, which includes Robert Glenister and Celia Imrie, has made Noises Off, the tale of a travelling theatre company attempting to stage awful sex comedy 'Nothing On', one of the winter's biggest hits.

Supposedly conceived in 1970 when the playwright was watching one of his own plays from the wings and observed that the production was funnier from behind the curtain than in front, Noises Off has, for thirty years, showcased the very best of British stage farce, complete with double entendres and attendant sauciness.

If 'Nothing On' is cheeky seventies pants-down pantomime nonsense, Noises Off is its irresistible, hilarious alter ego, itself rich in slapstick and farce and a hit with audiences everywhere. The transfer from the South Bank, sees Glenister, Imrie and the remaining cast reprise their roles.

We have tickets available now, priced from £25 for previews (until Monday 2nd April) and from £32.50 from 3rd April onwards.

It goes without saying that Noises Off will once again sell quickly, so don't miss out a second time. Meanwhile, we have just a handful of premium tickets available for a few of the remaining Old Vic performances.