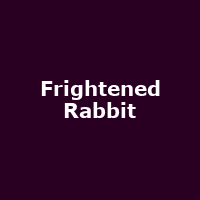 Scottish indie five-piece and overnight success nine years in the making, Frightened Rabbit, have announced dates in some of their country's more remote areas with their Highlands Tour 2012.

As the band point out on their website, "It can be a right bastard living miles from the city when you want to go and watch a bit of the ol' rock music". Quite. The remedy is a series of 10 gigs - five acoustic and five full band shows - in April that will enable music lovers in some of Scotland's less accessible locations to see an established, home-grown, indie rock outfit who are, at the same time, selling out Next Big Thing gigs in the nation's capital.

Formed in 2003, it wasn't until their third record, 2010's brilliantly titled 'The Winter of Mixed Drinks', that Frightened Rabbit started to gain widespread recognition. But it seems to happening for them now and the Highlands gigs may be the last chance to see the quintet in such intimate surroundings for quite a while.

The acoustic dates kick off on 11th April in Gourock, before gigs in Perth, Forres, Ullapool and Tobermory. The Perth show is free (FREE!) but we'll have tickets for the rest from 9am on Friday 3rd February, priced Â£10 to Â£12.

The full band dates follow the acoustic shows, starting in Aviemore on 18th April, then onto Stornoway, Portree and Strathpeffer, before the final gig of the Highlands Tour in Dunoon on Sunday 22nd April 2012. We'll also have tickets for the 'full band' shows available from 9am on Friday 3rd February, these are priced Â£14 and Â£15.

Frightened Rabbits' Next Big Thing 2012 show at the HMV Picture House in Edinburgh on Friday 10th February (supported by We Are Augustines) has sold out, as did the whole of the last tour.