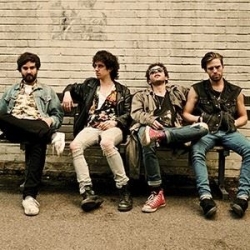 These days, avoiding becoming Just Another Indie Band From Camden is something of a challenge for new guitar bands out of North London. Thankfully, some have the guile and talent to avoid the trapdoor.

One such outfit would appear to be Tribes. Formed in 2010, the four-piece released their debut EP 'We Were Children' in April 2011, following that with their first full-length record, 'Baby', a fortnight ago. In-between the two releases, Tribes supported the Kooks and the Kaiser Chiefs.

The single of 'We Were Children' was released a week before 'Baby' and was named Zane Lowe's (accent) 'Hottest Record in the World'. All indications are that these lads might be a tribe worth following (oof).

Tribes kick off their tour at Southsea's Wedgewood Rooms on 24th April, followed by gigs in London (Shepherds Bush Empire) and Leeds, before the final UK date announced so far at Oran Mor in Glasgow on 30th April 2012. Tribes then head to Dublin for a gig at the Academy on 4th May.

We will have tickets for the April shows when they go on sale at 9am on Friday 3rd February, priced around £10 for UK shows and 13 for Dublin.

Ahead of the UK tour, Tribes will be spending much of February on the road with the NME Awards Tour 2012, appearing with Two Door Cinema Club, Metronomy and Azealia Banks at more than a dozen shows beginning in Glasgow on 8th February.

We have standard price tickets available now for the Glasgow NME show, priced £19.10, and premium tickets remaining for all other dates.