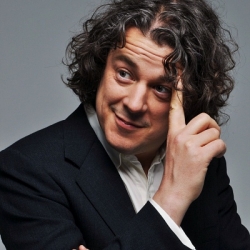 After a break of more than 10 years, Alan Davies is returning to the UK stand-up circuit with his show 'Life is Pain'.

Best known to modern audiences for his 100-plus appearances on panel show 'QI' and from re-runs of hit TV show 'Jonathan Creek', it was in stand-up that Alan Davies first made his mark back in the early 1990s. In 1991, he was named as Time Out's Best Young Comic and three years later he scooped the Edinburgh Festival Critics Award, the same year being nominated for the prestigious Perrier Award.

His last appearance at Edinburgh was in 2005 and, following a critically-acclaimed sell-out national tour of Australia, Davies is taking 'Life is Pain' back to the Scottish capital in the summer. The show sees Davies return to his much-loved stand-up style of sharply-honed wit swaddled in easy going storytelling based, as the title would suggest, on the various trials of modern life. Given that Davies is a lifelong fan of Arsenal FC, one imagines pain has not been in short supply recently.

Alan Davies' Edinburgh Fringe return begins at Venue 150 at the EICC from 9th August 2012. We have tickets available now, priced £18 to £20.

The UK 'Life is Pain' tour kicks off in September 2012 and visits Manchester, Milton Keynes, Blackburn, Newcastle, Stoke, Reading and many more. We also have tickets for the UK tour available now, priced around £25.

There's every indication that tickets for both Edinburgh and the subsequent tour will sell very quickly indeed, so do not hang around.