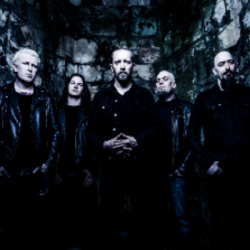 Long before the death, doom and gothic metal scenes became a battleground for bands competing on shock value and for who has the darkest, dirtiest band name, it was all about the music. Back in 1988, a five-piece from Halifax called Paradise Lost - a name of refreshing, poetic simplicity - began a career that has seen the boys win an army of deeply loyal followers and no fewer than a dozen studio albums.

A thirteenth full-length release, 'Tragic Idol', will be issued on 23rd April, and the quintet will follow the new record with the 13-date Tragic Idol Tour. As always, live shows from Paradise Lost, whose line-up has switched only drummers (always drummers) in the last 24 years, will be intoxicating, visceral affairs, packed with punch and power and showcasing a towering back catalogue.

Paradise Lost kick off the Tragic Idol tour in Cardiff on 16th April, followed by dates in Southampton, Glasgow, Sheffield, Manchester, London (Scala) and more, before the final gig at the Waterfront in Norwich on 30th April - 13 gigs in 15 days. Special guests on the tour are Insomnium.

Later in the summer, Paradise Lost will be appearing at Bloodstock Open Air Festival 2012 in Derbyshire on 12th August. We have tickets available now, priced at £115 for standard weekend tickets, or you can use the deposit scheme which involves paying a first instalment of £36.25 by 1st March, followed by monthly chunks of £42 during March and April.