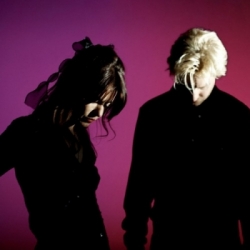 Don't let the fact that the line-up of Blood Red Shoes is just two in number; Steven Ansell and Laura-Mary Carter have developed an impressive track record for attracting trouble of one kind or another.

The release of their debut album 'Box of Secrets' in 2008 precipitated a rollercoaster three years of touring, partying and arguing. Not that occasional discord is necessarily detrimental to the pair's relationship. In 2010, mid-mayhem, they put out their second LP, 'Fire Like This', and, with the dust settling on another series of triumphs and contretemps, a third is on the horizon.

Among Laura-Mary and Steven's various adventures are on-stage near break-ups, 'having a giant fight in Prague' and the latter being robbed in the street by two prostitutes. Anyway, as Steven points out: "Modern bands seem way too clean-cut and sensible to us anyway". Amen.

The new album 'In Time To Voices', is released on 26th March and the indie rock duo will be taking the new material around the UK beginning a month or so later. 'Cold', the first single from the new record, will be released on 19th March.

Blood Red Shoes begin their tour with a hometown show at Brighton's Concorde 2 on 27th April, moving onto to dates in Oxford, Bristol, London (Heaven), Manchester, Aberdeen, Glasgow and more, before the final gig of the run at Nottingham's Rescue Rooms on 13th May 2012. Joining them for all date will be Dublin's The Cast of Cheers - themselves touring with Theme Park in February and March.

We have tickets available now, priced £12 for London and £10 for all other dates.