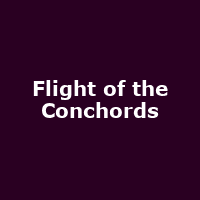 Flight of the Conchords

Lamb, Lord of the Rings and Rhys Darby. It would be unfair to attempt to characterise a country as popular and beautiful as New Zealand with a few a casual soundbites but if we're talking about the great nation's most successful exports, comedian and actor Rhys Darby has to be right up there with hobbits and All Blacks.

He is, quite simply, New Zealand's biggest comedian, combining character comedy, sound effects and devastatingly funny storytelling. Darby is still most recognisable as Murray, Bret and Jemaine's underperforming manager in the HBO worldwide hit series 'Flight of the Conchords'. He's also picked up film credits as a DJ in Richard Curtis's 'The Boat That Rocked' and 'Yes Man', the tale of Danny Wallace's comedy quest.

Increasingly, however, Darby is finding friends in ever more obscure places, appearing all over the world, from Iceland to the Falkland Islands, and a new UK tour is bound to boost the 'likes' over at Facebook.

We will have tickets available for all dates from 9am on Friday 27th January, except for London and Salford which are available now.

A third London date at the Shepherds Bush Empire has been added. Tickets go on sale Friday 27th January at 9am.