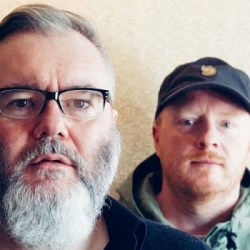 In 2011, barbed and bearded bard and Arab Strap mainstay, Aidan John Moffat released a rather absorbing opus in the shape of 'Everything's Getting Older'. Recorded with Strap contributor and buddy Bill Wells, the short and sweet 12-track lo-fi journey was appreciated by the esteemed monthly, MOJO magazine, who placed it in their Top 50 albums of 2011 list at #17.

The mainstream ignored it, in the same ineffectual way that it always bypasses talent and eccentricity, almost mirroring its indifference to Arab Strap's testy grey subject matter and Moffat's own previous dabblings containing just about every screwed-up human emotion that a 'dour' troubled troubadour could experience. Do you honestly think he gives a toss? Aidan John Moffat to appear at the BRITs? If only. He could read out one of his many literary pieces. 'Ballad of the Bastard' would suffice.

Thing is, Mr Moffat has a wicked sense of humour and irony. His last release, just prior to the aforementioned album, was another collaboration with Wells, a tongue-in-cheek reading of Bananarama's 'Cruel Summer'. Included on the EP was a lonely-hearts song, an 8-minute slice of Halloween-themed erotica and a finale (on the CD only) of Aidan ambling around his flat whilst in a bored state of mind. You don't get madness like that with The Saturdays or Ed Sheeran. You might want to seek out his 'Stolen Songs' album of tear-jerking covers of Cyndi Lauper, Marvin Gaye, INXS and more.

Beforehand though, it's worth plumping for some Moffat action. He will be touring with Bill Wells during the early spring, starting in Cambridge on 27th March, followed by Norwich, Cardiff, Dublin and more until York on 4th April - tickets cost £10 upwards and support comes from RM Hubbert, who just happens to have courted Moffat's attentions on the Hubbert opus, 'Thirteen Lost and Found'.