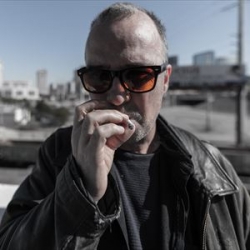 Doug Stanhope's website talks about the American stand-up's struggle to fill a large auditorium for a (rare) benefit gig he was putting on for the Humane Society. It paints the picture of a comic whose material divides audiences with its dark, cynical themes and Stanhope's cutting, acerbic wit.

Any concerns he may have for filling large venues in Arizona seem irrelevant this side of the Atlantic. His 2012 UK tour just keeps growing and growing. And selling out, and then growing some more. It's pointless trying to list all of the venues as more will have been added before reaching the end of the paragraph.

A seemingly fearless libertarian with a foul mouth, Stanhope's edgy routines perhaps connect more readily with the European scene than anywhere else. Not that he always gets away with it. At the Kilkenny comedy festival in 2006, all of Stanhope's appearances were cancelled after just 10 minutes of his first routine when he asserted that Irish men have sex with children because 'the women are so ugly'. At the Leeds Festival in 2009, he was booed and bombarded with bottles after making comments about the English and the Royal family. He kept going, baiting the audience further.

At home, he's waged high profile campaigns in support of abortion - specifically for Bristol Palin, the then-pregnant daughter of Presidential candidate Sarah Palin who reportedly forbade her daughter from having a termination. He's also successfully baited potential sex offenders online, posing as a child before exposing the individual. He's spiky. He's funny. He's Doug Stanhope, and they don't make them like him anymore.

The UK tour begins in London on 1st March with five nights at the Leicester Square Theatre, before shows in Bolton, Newcastle, York, Bradford, Glasgow, Liverpool and loads more, with the final gig announced so far at the Hammersmith Apollo on 21st April. Recent additions include dates in Tunbridge Wells, Torquay, Portsmouth and Cambridge.

We have tickets available now, priced around £20.