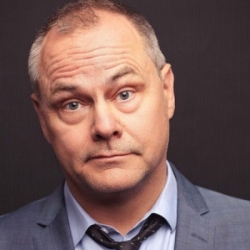 Jack Dee may be one of the nation's finest and best-loved stand-up comedians but it has been six years since he last went on tour.

Not that he's been sat at home watching Sky Sports and eating crisps. He's been busy appearing on 'QI' and 'Shooting Stars', and writing and appearing in four series of 'Lead Balloon', his sitcom about a grumpy comedian struggling for work - a role Dee can only identify with in part.

He's also written an autobiography, 'Thanks For Nothing', which he characteristically dedicates to himself, without whom 'none of this would have been possible'. Despite time away from the mic, Jack Dee's reason for going on the road again suggest he's lost none of his appeal: "I want to spend less time with my family," he says.

Ahead of the (as yet unannounced) 2012 tour, Dee is trying out new material with a series of 'Work in Progress' gigs, a run of five of which has just been announced for 7th to 11th February at London's Soho Theatre.