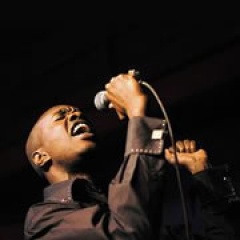 No-one could accuse flamboyant ex-Croydonian and falsetto-soul vocalist, David McAlmont, of resting idly on his laurels - it seems like the distinctive singer's name has been permeating our eardrums for decades already and looks set to be continuing that trend for a while to come with his latest project, Fingersnap. That's them on our exclusive video, just to your right!

But this newish duo, formed with songwriting partner of yore Guy Davies, is one of a long line of collaborative adventures and musical deviations which started in the early '90s with Thieves, a much-underrated popsicle of sprightly indie-anthems and melodically-adventurous singles that included the gorgeous "Unworthy". Then came the more robust and successful core of McAlmont and Butler (Bernard of Suede), a pairing that initially appeared unlikely, yet spawned some cracking hit-singles such as "Yes" and "You Do". Even NME liked them for more than 5 minutes.

The creative collaborations continued throughout the next decade or so with film-soundtrack guru David Arnold, trippy electro duo Ultramarine (why wasn't "Hymn" a hit?) and a resumption of his recording partnership with Butler, before McAlmont and Michael Nyman formed another unlikely alliance with the well-received album and concert-series, "The Glare".

Now, with Fingersnap, David McAlmont and Guy Davies have rediscovered their songwriting muse once more - their recent EP "Smokehouse" is a quartet of bright soul-pop and socially-aware balladeering that became something of a trademark when they worked together on McAlmont's solo set, "A Little Communication".

The duo will be embarking on a UK tour during February, starting with Leicester on 1st, followed by Manchester, Hebden Bridge, London (for Valentine's Day), Exeter and several more until resuming and concluding the action in March at Cox's Yard in Stratford-upon-Avon.

Tickets are on sale now, priced at around £10 for the regional shows and £20 for the grander-scale London show - check the list below for ticket availability