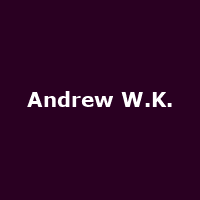 It has been around a decade since 'I Get Wet', the debut studio release from Andrew Wilkes Krier, aka Andrew W.K., caused a stir with its memorable and thought-provoking cover art.

The 2001 12-track release may have topped the US Billboard Heatseekers Chart (for new/emerging artists) and spawned a number of memorable hit singles, but it is for the close-up cover image of Andrew W.K. with a bloodied nose, the red stuff streaming down his face and neck after a blow to the face, that the record is most widely known.

Rock being rock, it was quickly pointed out that the singer had self-inflicted this injury in the studio, with a brick no less. W.K. later revised the tale to confirm that the brick blow had not produced enough claret, so he'd supplemented the flow with animal blood from a nearby butchers. Strangely, a bit more rock'n'roll than the original ole brick-smash story. In any case, the result was very effective (as you can see).

Andrew W.K. is marking the 10th anniversary of the album's release with a tour during which the musician and his band will perform 'I Get Wet' in its entirety, which will include the hit singles 'Party Hard' and 'She Is Beautiful'.

The short UK tour kicks off at London's Electric Ballroom on 12th April, followed by Manchester's Club Academy the next night and finally the Glasgow Garage on 14th April. [note: both the London and Manchester dates have now been upgraded due to demand. The London gig is now at the HMV Forum, with Manchester's taking place in the same building but at the Academy, rather than Club Academy - Ed]

We'll have tickets for the UK shows when they go on sale at 9am on Friday 20th January, priced Â£17.50 for London and Â£15 for Manchester and Glasgow.

The Scottish gig is the last night of the 'I Get Wet' anniversary tour so, if he hasn't already done so (every night), you can expect W.K. to end the tour with a self-administered Glasgow Kiss to recreate the cover. The least you can do is go to the gig gored up.