The National announced as curators for All Tomorrow's Parties 2012 - tickets for December weekend on sale Friday 20th Jan!! 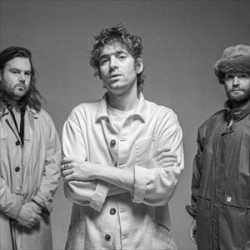 Last year's ATP Festival, curated by Jeff Mangum, has now officially become one of two 2012 All Tomorrow's Parties extravaganzas with today's announcement. Mangum's weekend will be taking place in a matter of weeks from 9th to 11th March (tickets still available), but now the organizers have unveiled the initial line-up for, what will hopefully be, an uninterrupted December ATP at Minehead's Butlins.

US alt-rock behemoths The National have already grasped the curating torch for the eclectic three-dayer, which this year will run from 7th to 9th December. First confirmed acts include legendary arty classical ensemble Kronos Quartet, Brooklyn indie band The Antlers, psych-folk upstarts Megafaun plus Suuns, Boris (not Johnson, mercifully), Owen Pallett, Tim Hecker, a cinema, a book club, DJs and a cabin to sleep in. Oh, and The National will of course be performing their only UK show at some point during the weekend!

All of which brings us nicely to the grisly business of paying for tickets and accommodation. Thankfully, ATP have ensured that a limited batch of Early Bird Specials will be available from the general on-sale date (that's this Friday), as well as Family Tickets. Prices before the end of Friday 27th January, start at £150 per person for board only, or £160 per person for board and self-catering. They will then rise by £10 per option (£160/£170) until Friday 3rd February, before the standard pricing structure of £170/£180 kicks in until the tickets sell out.

We will also have the aforementioned Family Tickets, four-berth self-catering cabins, for just £460 (instead of face value of £720) for two adults and two children. You can also buy Kids Tickets separately for 5- to 12-year-olds for £50 each. Don't worry - there are loads of things for kids to do if they can't face the music! More acts will be announced in due course.