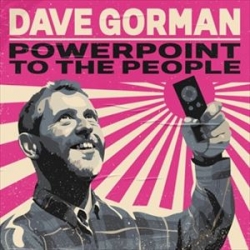 Dave Gorman is no stranger to travel. After building his CV with a range of writing credits (including for Caroline Aherne's Mrs Merton), he found national fame with a series of shows with a theme that usually involved a bit of leg work on his part.

There was his mission to find others called Dave Gorman, his trip across the US attempting to subsist using only independent traders for his food, fuel and lodgings and even a tour on his bike, cycling between gig venues. Fitting then that the dates for his 2012 tour, 'Dave Gorman's PowerPoint Presentation' (he loves Microsoft PowerPoint), read like the jumbled index from a UK road atlas.

After debuting the PowerPoint show at the Edinburgh Fringe last year, he followed that with a sold-out autumn tour. With the show set to return for a huge 2012 tour beginning in May, Gorman is squeezing in four more dates after a Doncaster Comedy Festival show in February and before the tour kicks off 'proper'.

We will have tickets available when they go on sale at 9am on Friday 20th January, priced £22.50.