This Will Destroy You - 2012 UK tour dates on sale now 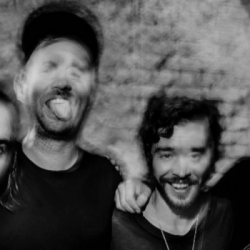 Instrumental Texan outfit This Will Destroy You resist their labelling as 'post-rock', preferring 'doomgaze' - a marriage of doom metal and shoegaze (not shoe-metal, then). Either way, it's three guitars, a drum kit and a lot of energy. It is rock, of sorts, albeit with a droning theatricality.

The four-piece also claim their name is meant to be misleading and "a little bit obnoxious". If you've ever seen a three-guitar band at Moho Live in Manchester (where TWDY play in April), you will know that if you stand just in front of the stairs, about 20 feet from the stage, there is a very real chance that the noise WILL destroy you.

Genre-defying, deliberate obnoxiousness and bleeding ears aside, TWDY have produced two critically-acclaimed albums; 2008's self-titled debut and last year's 'Tunnel Blanket', which picked up four- and five-star reviews and entered the US Billboard Heatseekers chart at No 25. TWDY toured the record in 2011, selling out most of the half-dozen summer dates.

This Will Destroy You kick off their whistle-stop 2012 UK 'tour' at Moho Live in Manchester on 4th April, followed by a gig at the Islington Academy the next night.

We have tickets available now for the Manchester gig, priced £10. We'll have Islington tickets when they go on sale at midday on Monday 16th January, priced £13.50.

With most of the 2011 tour having sold out, demand for these two gigs is expected to be high.