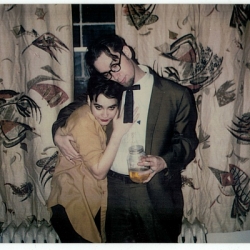 Husband-and-wife Americana and roots duo The Handsome Family continue to charm the proverbial birds from the trees, with the announcement of a UK tour AND the promise of new music. With accolades having already been fired in their direction from the press (Uncut magazine hailed 1998's 'Through The Trees' as Best New Country Album of the Year) and with regularly sold-out shows, Brett and Rennie Sparks might be wondering when their big moment will happen over here. As with all good things, it will come.

Lyrically, they draw on darker themes than most similar folk/country acts, using literary sources for inspiration, as well as murder, suicides and the macabre. Musically, they transform you to desolate prairies, rundown garages piled high with scrapped pick-up trucks and deep, dark verdant forests with only the odd grizzly bear to keep you company. Have a listen to 'Weightless Again' on the aforementioned 'Through the Trees' album and you'll see (hopefully) what I mean. If Tindersticks did country... Well, you get the idea.

The duo's last album, 'Honey Moon', appeared in 2009 to the usual critical acclaim and sold-out shows and now, some three years later, the time is right for a follow-up and Loose Recordings have just the very thing - a new album of course. You can check out a brand new track by The Handsome Family ('Come Outside and See') by heading to www.loosemusic.com/thisisloose and downloading a tasty digital copy of the 'This Is Loose' sampler, also featuring like-minded artists such as The Felice Brothers, Dawes and Jim White.

May sees The Handsome Family return to the UK for a string of shows, starting with Leeds on the 16th, followed by Glasgow, Belfast and more until they hit the iconic 100 Club in London on 27th May.

We have tickets available now, priced from £9 to £15. They will sell pretty quickly.