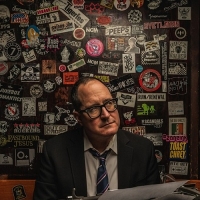 Despite not having much crossover success in the UK, The Hold Steady have gathered themselves a loyal fanbase, though nowhere near the same scale as their US homeland. However, their brief dalliance with radio playlists came courtesy of the album 'Stay Positive', released in 2008 and a Top 20 debut for the band.

Not content with fronting his beloved band, Craig Finn will be going solo for a bit - he's got a new album all to himself, due for release on 23rd January. Titled 'Clear Heart, Full Eyes' and produced by Mike McCarthy, the set is, according to Finn, "a little quieter and perhaps more narrative than The Hold Steady".

You can check out just how narrative it is by catching him at a free in-store PA and signing at Rough Trade East near Brick Lane on 25th January. Spaces are limited - click on 'more info' for details.

Whilst he sorts out his own 2012 tour dates, Craig Finn is also supporting The Felice Brothers during their rescheduled UK tour in March - it kicks off at The Macbeth on 13th (sold out though), followed by Birmingham, Dublin, Glasgow, Manchester and finally the almost sold-out KOKO show on 20th March.