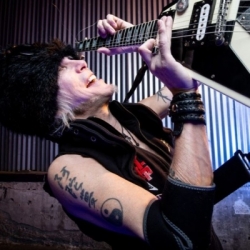 Long before the Scorpions' political bandwaggoner 'Winds of Change' swept through the European charts in 1991, the German rock outfit had been a much harder prospect. The whistling, stadium rock of 'Winds of Change' was enough to take it into the top five of the US charts but the band behind it had been born with a much blacker heart.

With his brother Rudolf sharing guitar duties, Michael Schenker was a founding member of the Scorpions in 1969. In the early seventies, he was offered the lead guitar role with UFO, who the fledgling Scorpions had been supporting. Replaced in the band by Uli Roth, Michael went on to enjoy a successful if, at times, tempestuous relationship with UFO.

After a few on stage walk-outs, he finally left UFO in 1978 and, after a briefly-rekindled romance with the Scorpions, Schenker launched a solo career with the Michael Schenker Group, or 'MSG'. Clearly, the guitarist and three-letter acronyms do not always get on and, as with UFO, MSG was a success tinged with internal scuffles and creative wrangling.

The music, however, still came. Last year saw the release of 'Temple of Rock', Michael Schenker's latest solo work. It featured contributions from brother Rudy (still a Scorpions mainstay) and even a spoken word cameo from William Shatner. The record was well-received and spent a week in the UK Top 40, where Schenker still attracts a loyal following.

The tour kicks off in Wolverhampton on 9th May, followed by dates in Manchester and Glasgow, before the final gig at the Shepherd's Bush Empire on 12th May.

We will have tickets available for all dates when they go on sale at 9AM on Friday 13th January, priced from £22.50.