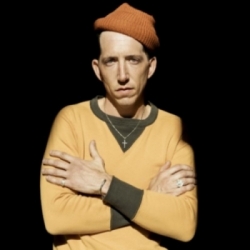 If you were gawping at the TV screen through a bleary haze of spirits and Auld Lang Syne on New Year's Eve at around midnight, you may have spied the rather riveting roots-blues regalia displayed by the dandy band in the picture. In the run-up to the big chimes, Jools Holland eagerly introduced Pokey Lafarge and his accompanying musicians, the South City Three, before they launched into "La La Blues", taken from their 2010 album, "Riverboat Soul". Judging by reactions on their Facebook page, they didn't go unnoticed...

Blessed with a real name, but opting instead for two nicknames of 'Pokey' (from his youth) and "LaFarge" (mirroring folk troubadour Peter LaFarge), the diminutive singer has been continually traversing the States and beyond since his formative years, finally settling long enough to dish out a 2007 debut set, "Marmalade" and gather up three musicians afterwards to record a handful more including his upcoming 2012 opus, "Middle of Everywhere".

The album's cover depicts a young man in Depression-era clobber, looking for all the world like a sour-mash blend of Bing and Hank (Williams not Locklin). He doesn't sound like them though - this is a man who clearly researches to the nth degree, owing much of his ideas and influences to Southern Delta Blues and Nashville Ragtime Vaudeville.

If you were salivating at this man's deft delivery on Jools' jolly 'Hootenanny' then you'll no doubt be aware of his forthcoming amble around the British Isles. Prior to hitting the UK however, he's due to play Kilkenny, Dublin and Cork in March before heading to Belfast on the 18th. Two days later will see LaFarge and co hit Manchester, then Glasgow, Aberdeen and many more until the last show in West London at the Bush Hall venue on 29th March. Tickets are on sale now, priced from £10 to £13.50. The London venue isn't huge so expect tickets to sell out very quickly!