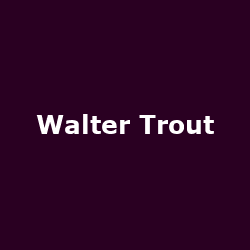 Although the blues guitarist cut his teach with both acts during the '80s (i.e. neither bands' heydays), Trout has spent the past two decades forging his name as a major bluesman, even pausing to enlist a few of his heroes to help out on his 2006 album, "Full Circle" - John Mayall and Joe Bonamassa, who just missed out on appearing in the Allgigs Top 10 Albums of 2011 Listings [and here is that top 10, kiddies: www.bit.ly/AllGigsTop10Albums2011 - Ed].

Prior to that all-star cast, Trout's chops were apparent for all to see [and hear, presumably? - Ed] on his previous albums, with the UK catching on fast with the '90s albums "Prisoner of a Dream" and "Transition". Here was a man who feels his way around a fret-board with the facial expression of a man in love with his craft - and it shows. Despite not having a hit in the UK, he's built up a steady fan-base with reliable albums, including last year's solo set, "Common Ground" and the must-have live album from 1993, "No More Fish Jokes". Sorry Walter - I just couldn't help myself with that headline.

In March 2012, you can witness the man's incredible guitar-work when he tours the UK. First stop is Newcastle on the 7th, followed by Leeds, Sheffield, Clitheroe and many more before heading south to the West Country for Tavistock and Bristol. We have tickets on sale now priced from £15 (Wolverhampton) to £22 (Leeds).