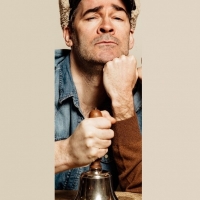 If the Edinburgh Comedy Awards are the Oscars of comedy, then Adam Riches is Colin Firth in The King's Speech. His one-hour show 'Bring Me the Head of Adam Riches' earned him the 2011 Edinburgh main award and, in doing so, propelled Riches into a select group of comedians, which includes Russell Kane, Rich Hall, The League of Gentlemen, Steve Coogan, Lee Evans and Frank Skinner.

'Bring Me the head of Adam Riches' was the comedian's fifth Edinburgh show and, after earning rave reviews for his previous shows, including 'Rogue Males' and 'Adam Riches Rides!', he finally collected the Fringe's top accolade in late August this year.

Riches' show, a wildly unpredictable and anarchic affair with a brilliant/ terrifying amount of audience interaction (inviting them to play swingball and impersonate Daniel Day-Lewis), saw off a late challenge from joint favourite Nick Helm. The Independent called the show 'sixty minutes of brilliantly-conceived chaos' while the Telegraph was so excited it raided the thesaurus to call Riches 'lysergically' creative (if 'lysergically' is indeed a word, it probably has something to do with LSD-fuelled inventiveness). We'll plump for 'very creative'.

In any case, Riches' comedy is edgier and funnier than most edgy, funny comedy you'll have ever seen and like any Edinburgh winner, he is in demand. Now a 'made guy', Riches has the nation's promoters bowing and scraping before him and he has picked up a month of gigs at the Soho Theatre in London's West End.

'Bring Me the Head of Adam Riches' opens on 13th February, running until Saturday 17th March 2012. We have tickets available now, priced just £10 for the opening nights, rising to £20 for the best weekend seats.

Cheap at twice the price - you should definitely go. Unlike the reviewers at the Telegraph, it's very creative.