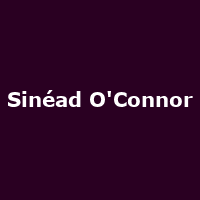 Born in Ireland 44 years ago to the month, Sinéad O'Connor's genus of musical firebrand was thrust into the faces of an unsuspecting public with the aptly-titled album, "The Lion and the Cobra". Anyone curious enough to investigate the sonically-tonsilled singer of the 1987 hit, "Mandinka" (more than likely after hearing it blaring out of a nearby building-site radio) were possibly deterred by that debut-album's sleeve, on which O'Connor appears shaven-headed, wearing a vest, clenched of fist and snarling of mouth.

The album's centerpiece, "Never Gets Old", is based upon Psalm 91 and features Enya reciting said biblical extract in Gaelic, a nod to O'Connor's continued flirtation with religious imagery and controversy. She upset a few people by tearing up a picture of the Pope on Saturday Night Live, which was intended as a protest at sexual abuse - the backlash was akin to a Brand or Clarkson moment, though arguably far less trivial. She meant business. She even upset Madonna (you know, the one who released the book, "Sex" and the album "Erotica" a year or so later).

In time, Sinéad O'Connor has balanced her views with great music. After the modest success of "The Lion and the Cobra", she surprised everybody (possibly even herself) with the sophomore follow-up, "I Do Not Want What I Haven't Got" and its resulting #1 single, her elegiac cover of Prince's "Nothing Compares 2 U". For once, here was a decent chart-topper that nobody minded seeing on Top of the Pops, week-in, week-out. She never quite hit the heady heights of 1990 again, but she's never been that far from music.

2012 will see the release of her first studio album since "Theology" in 2007. "How About I Be Me (And You Be You)" will appear on One Little Indian in February, just in time for her first UK tour in as many years (she has played the odd gig here and there - a string of summer shows at the Manchester International Festival and a show at the Mencap Little Noise Sessions in Hackney last month).

First stop will be Brighton on 9th March, followed by Bristol (12th) and lastly (for now) Manchester (15th). Tickets are on sale now, priced at £25. Tomorrow night (18th) you can catch her at the Olympia Theatre in Dublin - tickets are still available for 33.50 and 35.50.