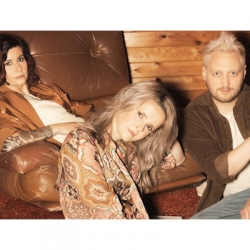 The Subways are one of indie music's quiet success stories, their breakthrough reminiscent of a bygone era when a DJ or promoter would champion a new band's cause until the music-buying public saw the light.

The three-piece from Welwyn Garden City made a point of recording as many of their early shows as possible, capturing live tracks and demos on CD and enthusiastically, if blindly, despatching copies to industry figures and promoters. One such recipient was Michael Eavis.

Liking what he heard and the manner in which he'd received it, he picked up the phone and booked the then unknown outfit as winners of the Unsigned Bands competition and awarded them a slot on the Glastonbury Festival's Other Stage. Leeds and Reading followed, as did a self-funded tour. The fact that the late John Peel was the first DJ to play their single '1am' on national radio gives The Subways' genesis one final, romantic twist.

Three albums have followed. All have performed well, though not spectacularly, with second record 'All or Nothing' achieving their best chart position to date, reaching No 17 in 2008. The latest LP, 'Money & Celebrity', was released in September and was the launch pad for a sold-out autumn tour.

The UK and Ireland leg of the 2012 European tour kicks off in Belfast on 27th April, followed by a gig in Dublin, before returning to Britain with a gig in Cardiff on 29th April. They then play Bournemouth, Middlesbrough, Coventry, Edinburgh and Manchester (The Ritz), before the final date of the European tour at the Shepherd's Bush Empire on 10th May 2012.

With the exception of Dublin, tickets are now on sale, priced £12 regionally and £15 for London. Tickets for Dublin will cost 14.50 and go on sale Friday at 9AM.

Ahead of the 2012 dates, The Subways are playing at the Kerrang! Radio Xmas Party at The Ballroom in Birmingham on Friday 16th December. We have tickets available now, priced £10.