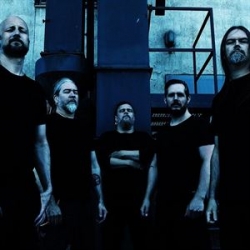 Scandinavia is notorious and renowned for its metal output and Sweden's Meshuggah rank as one of the seriously noisy contenders. Formed in the late '80s, the band's sound has continued to evolve from straight-edged death or dark metal, into the so-called 'math-metal' or technical rock genre so beloved of Tool et al. Mixing unworldly time-signatures and some serious nail-gun drumming (occasionally programmed), Meshuggah are a law unto themselves.

Their most recent glorious racket came in the shape of "obZen" in 2008, an uncompromising maelstrom comprised of delightful nuggets such as "Combustion", "Pineal Gland Optics" and "Bleed", an edited version of which you can show your horns to, just above. Favourable reviews, mainly from the US press, have resulted in sold-out headlining tours in the UK - their last tour in 2008 being a case in point. They've played Ozzfest and supported Tool and are due to hit Australia for the Soundwave Festival 2012. But you don't need a ticket Down Under to see these boys in action next year - just a ticket from us!

Meshuggah's new album, as yet untitled but written by the entire band, is set for release in late March, followed up by an extensive UK tour in April. This jaunt kicks off in Bristol on 12th, followed by the usual big cities, including rare shows in Norwich and Brighton, before landing fully-primed for a show at HMV Forum in London on 20th. Support for the tour comes from US prog-metallers Animals as Leaders who will remain in the UK for their own May tour.

We will have tickets for the Meshuggah tour from Friday 16th December onwards, priced at £15 (London is £17.50). It will be one hell of a blast!