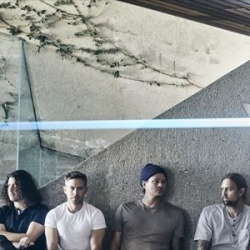 Alt-rock supergroup Angels and Airwaves have announced that they are to visit the UK next spring with a six-date tour.

Led by Tom DeLonge, singer and guitarist with pop-punkers Blink-182, Angels & Airwaves are part-music, part-multimedia art project. That's not to suggest they're pre-occupied with style and not substance - on the contrary, they've been prolific. In the six years since forming, 'AVA' have released four studio albums, appeared in a documentary (2008's 'Start the Machine') and even scored and produced a sci-fi movie, this year's 'Love', the basis for two of the studio records.

Joined by guitarist David Kennedy (Over My Dead Body, Hazen Street and Box Car Racer), bassist Matt Wachter (30 Seconds to Mars) and former Lostprophets and Nine Inch Nails drummer Ilan Rubin, DeLonge's side project does, for a change, exactly what a side project should; allowing artists to stretch their legs and horizons beyond the creative confines of their bands.

The momentum generated by Angels & Airwaves, initially created following Blink-182's 2005 hiatus (ironically at DeLonge's request, so that he could rest), has meant that DeLonge now splits his time between both bands and is busier than ever.

Although AVA's 2006 debut 'We Don't Need to Whisper' remains their best performing record, hitting the Top 5 in the UK and US, this year's 'Love: Part Two' has again broken the Top 30 on the US Billboard chart and AVA are maintaining considerable impetus.

The tour kicks off in Nottingham on 9th April, followed by dates in Glasgow, Manchester (The Ritz), Leeds and Birmingham, before the final gig of the run at the Shepherds Bush Empire in London on Saturday 14th April 2012.

We will have tickets available for all gigs when they go on sale at 9AM on Friday 16th December, priced £22.50 for Shepherds Bush and £19.50 for all other dates.