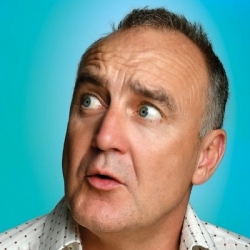 Because Jimeoin lives in a land Down Under, many people in the UK might not have heard of him. In Oz, they pretty much got used to him appearing in all manner of venues across the entire country, made all the more familiar with the Irish TV series, "Jimeoin Down Under" (filmed over a three year jaunt across the Australian continent) and a successful TV series of his own in Oz. Back in the UK, he's sold out season after season at the Edinburgh Fringe and residencies in London. But, at present, he is winding the year down in Brisbane for a festive run.

Jimeoin's observational comedy about human traits, quirks and nuances is less frenetic and aggressive than most other stand-ups - if you saw him on Michael McIntyre's Roadshow last year, you'll remember his funny skit on eyebrows, i.e. when to raise them (asking for the toilet) and when NOT to raise them (searching in your trouser pockets). His last tour, "Something Smells Funny", was a big success into 2010 - now for 2012, his show has an air of loveliness about it - it's called "Lovely!"

The Irishman's UK tour, will start in Buxton on 28th Feb, followed by Cambridge (29th - it's a leap year), then shows in Southend, Peterborough, Swindon, Bath and more until the March leg ends in Lincoln on 24th. He returns to the UK in May for more gigs in Hayes (West London), Tunbridge Wells, St Albans and Guildford. He's also just announced a Dublin date at Vicar Street, but that one's almost a year away, taking place on 3rd November 2012. More UK and Ireland dates are likely to be announced in due course, so keep checking back if you area's not yet covered - not least central London!

Jimeoin was also in this year's Royal Variety Performance, hosted by Peter Kay, which took place last week and is set to be screened by ITV this Wednesday (14th December) from 7:30pm.

Tickets are available now for all dates, priced from £14 upwards (25 for Dublin).