Frankie Valli and the Four Seasons announce UK dates for 2012 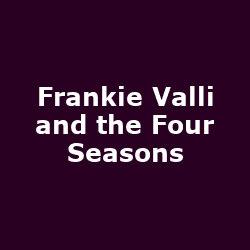 Few singers have enjoyed the kind of enduring success that Frankie Valli has seen in his near 60 years in the music business. As frontman with The Four Seasons, Valli has celebrated around 30 Top 40 hits in the US and a further nine as a solo artist.

His distinctive falsetto vocal has crowned many a global smash, including 'Big Girls Don't Cry', 'Walk Like a Man', 'Rag Doll', 'Sherry', and 'December 1963 (Oh, What A Night)', the last of which sold half a million copies in the UK alone. After 1970, the group became known as Frankie Valli and The Four Seasons with membership of the backing group continuing to change.

The music of The Four Seasons was brought to the attention of a new generation when it featured in the 2005 hit musical, Jersey Boys. Making its debut on Broadway, Jersey Boys scooped four Tony Awards in 2006, including Best Musical, before going on to tour the world.

Valli has also continued to tour, with and without The Four Seasons, and also registered solo US No 1 hits with 'My Eyes Adore You' and 'Grease', the title track from the 1978 film. But he hasn't performed in the UK for nearly two decades, making the two dates announced for next summer a rare treat and, no doubt, among the season's hottest tickets.

Frankie Valli and the Four Seasons will be playing at Hampton Court Palace on Saturday 23rd June 2012, the final day of the Palace's 11-day festival. Ticket details are set to be announced soon.

On Tuesday 26th June, Frankie Valli and the Four Seasons are playing the Royal Albert Hall in what promises to be a very special night.

We have tickets available now for the Royal Albert Hall date, priced from £45 for Gallery seats to £85 for Arena (floor) seats.