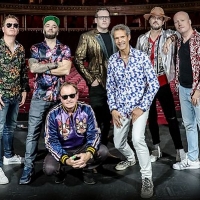 It's more than three decades since Level 42 first began storming the charts with their brand of jazz-funk pop. In the mid-eighties, the sight of frontman Mark King on Top of the Pops, wearing his bass like a necklace with keyboardist Mike Lindup over his shoulder, became a staple of Thursday nights.

The Level 42 sound - and distinctive look - became familiar to audiences as the band worked toward record sales in excess of 30 million. Their commercial peak began in 1985 with the album 'World Machine', which became a worldwide hit, reaching No 18 on the Billboard chart and the first of four consecutive top five records in the UK.

The next album, the band's seventh, was even bigger. 'Running in the Family' reached No 2 in the UK and produced the hits 'Lessons in Love', 'Running in the Family' and 'To Be With You Again'. It capped an amazing four years for Level 42 and added to a back catalogue that already included 'The Chinese Way', 'Something About You' and the eighties playground break-up classic 'Leaving Me Now'.

In 1994, the band split. The 2001 reunion saw the band move on without Phil and Boon Gould, and lacking their iconic keys man, Mike Lindup (although he did agree to return, with his falsetto harmonies, 'at a later date'). After a five-year wait, Lindup and King were reunited in 2006, the same year Level 42 released their latest album, 'Retroglide'.

The 2012 tour kicks off in Oxford on 7th October , followed by dates in Folkestone, Watford, Guildford (Lindup's hometown), Liverpool, Glasgow, Manchester and many more, before the final show at the Royal Albert Hall on Sunday 28th October 2012.