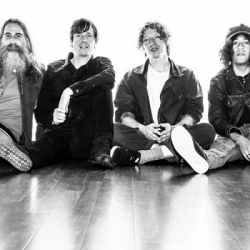 Liverpool's musical-legacy and Brit-pop connections continued last year, with the announcement that John Power's Cast were to reform and play their beloved back catalogue, including the recently reissued "All Change" album in its entirety. Clearly, the income from those many sold-out shows and festivals has been put to good use, courtesy of the fund-raising site, Pledgemusic - yes, Cast fans, their new album looms large on the horizon.

Following on with the tradition of crafting rousing Scouse pop, Cast will finally follow-up their last album, 2001's "Beetroot", with "Troubled Times" a new set of songs recorded with legendary producer John Leckie. This is a great coup for the band - Leckie can count Radiohead, Stone Roses, XTC and, of course, Cast themselves (on their classic aforementioned 1995 album, "All Change").

You can listen to the jangly and sprightly first single from the album, "See That Girl" (out 19th Dec), by clicking on the lovely embedded player, above - and why not check out the tour details while you're listening?

First stop will be Newcastle on 29th March, followed by Glasgow, Liverpool, Leamington and more until Shepherd's Bush on 6th April. Tickets go on sale from 9am on Friday, except for Leamington which you can buy now - £20 upwards for all shows (£22.50 for London).

Prior to the spring tour, you can catch the the band as they play a short tour this month, with dates in Middlesbrough, Dunfermline and Coventry from 15th to 17th December. Tickets cost £20 and are available now.

Additionally, lead singer John Power will be part of the line-up for this Friday's 'Justice for Hillsborough' gig, featuring Mick Jones from The Clash and B.A.D, Pete Wylie from the Mighty Wah!, The Farm and Billy Bragg. Tickets are still available, costing £17.50, with proceeds from the night going to The Hillsborough Justice Campaign. He also plays a solo date at Newcastle's Riverside on 22nd December, tickets for which cost £10 and are available now.