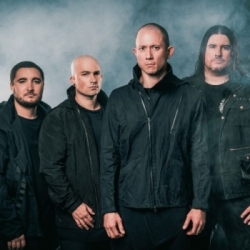 Within around three-and-a-half years of forming, Rise To Remain found themselves supporting Korn, Funeral For A Friend and Bullet For My Valentine.

But that's not the half of it. They've played Sonisphere and Download festivals and Rise To Remain were also voted 'Best New Band' at the 2010 Metal Hammer 'Golden God Awards', and won 'Best British Newcomer' at the 2010 Kerrang! awards. Rise indeed.

All of this success followed the release of just two EPs, 2008's 'Becoming One' and then 'Bridges Will Burn' in 2010. There was an earlier EP 'Illusive Existence' back in 2007 when the band were known as Halide. The five-piece's full-length debut didn't come until September 2011 with 'City of Vultures', after signing with EMI in March.

'City of Vultures' reached No 3 on the UK rock charts and, a bit bizarrely, was a top ten hit on India's International Top 12 chart. The critical response was unequivocal however, with Kerrang! giving it 4/5, and both Metal Hammer and Q rating the record 8/10. Bastion of musical quality control, lad's mag Front, gave the album a 5/5.

The London-based rockers will be taking the new record and their short but spectacular back catalogue on the road early next year, in what will surely be one of the last opportunities to see them in intimate surroundings.

Rise To Remain kick off their 2012 tour in Birmingham on Wednesday 7th March, followed by gigs in Portsmouth, Norwich, Liverpool and York, before the final date announced so far at the O2 Academy Islington on Saturday 17th March 2012.

We will have tickets available for all gigs when they go on sale at 9AM on Friday 2nd December, priced at £10 for most, £12 for London and £13 for Glasgow and Norwich. Note: tickets for York go on sale at midday on Friday.

Support for the tour comes from German metalcore outfit, Heaven Shall Burn whose most recent album, 'Invictus (Iconoclast III)', was released in 2010.

Rise to Remain also head out on the Metal Hammer - Defenders Of The Faith tour which kicks-off tonight in Southampton, with further dates in Wolverhampton, Manchester, Brixton, Glasgow, Newcastle, Plymouth. Headlining the tour are Trivium, with In Flames, Ghost and Insense also on the bill. We have tickets available for all dates, costing £21.50 for all except Brixton, which is £23.50.