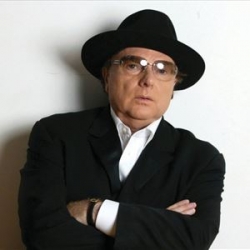 Since 1967, Belfast's prodigal (and occasionally testy) child has issued some of the most grandiose and beautiful music, yet still hasn't succumbed to record company pressure to 'sell out'. His first album was a statement of intent - "Blowin' Your Mind" was acclaimed by many including Rolling Stone magazine and featured one of his signature songs, "Brown Eyed Girl". If that first album title doesn't seem familiar, his next pairing surely will - "Astral Weeks" and "Moondance", both cemented Morrison's unerring reputation to turn a tune. Neither folk, nor jazz, nor pop, nor blues or even rock, record shops were occasionally tempted to give him his own shelf.

The uncategorized singer has gone on to release dozens of subsequent albums without compromising on quality (even the Cliff Richard collaboration wasn't too irksome) and must be due another studio album by now. Before that news breaks however, there are more UK shows on the horizon. Having previously announced two dates in Belfast and Dublin in February, he's now added a quartet of shows this side of the Irish Sea, starting with Gateshead on 11th Feb, followed by York's Barbican Centre on the 12th and then Brighton and Bournemouth in early March.

The gap in dates may signify more shows to be finalised in due course - whatever, this foursome will be on sale from us from 9am Friday, with prices starting at £45 (Belfast is £55 upwards, Dublin starts at 56).