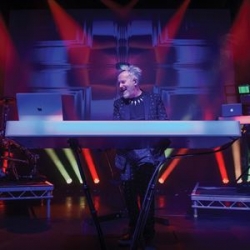 As the '80s revival machine keeps on chugging along, interest in synth-pop doesn't appear to be waning anytime soon. The annual Revival Festivals appear to be shifting lorry-loads of tickets (Jones has been part of the tour in recent years), while shows from the likes of Heaven 17, David Sylvian and the Back to the 80s tour continue to sell well.

Quietly going about his musical business in the decade of financial and chemical decadence was sprouty-haired songwriter Howard Jones. With little in the way of fuss or fanfare, Jones escaped his hometown of High Wycombe to ink a deal with WEA, part of the huge Warner Music Group. There soon followed nine straight Top 20 singles, a number 1 album and at least five years of teenage adulation and Smash Hits photo sessions.

His biggest hits such as "New Song", "What Is Love?", "Things Can Only Get Better" and "No One Is to Blame" were all culled from his first two albums, "Human's Lib" and "Dream into Action". The former spent over a year in the album charts and sold over half a million copies. The follow-up didn't do too badly either - which bodes well for his next tour remit.

In April 2012, Jones will repeat his unique IndigO2 concert of 2010 (it sold out) by performing both of the above albums in their entirety as part of his own headlining tour. Six shows have been confirmed so far, starting with Bristol on 11th April, followed by Sheffield, Liverpool, Birmingham, Newcastle, Glasgow, Bournemouth and finally London's Shepherd's Bush Empire on 21st April. Tickets for the shows will cost £20 (£22.50 for London) and go on sale Friday at 9AM.

With Christmas just around the corner, you can also buy Jones' new DVD, "Human's Lib & Dream Into Action Live at The IndigO2", a double-set containing the 2010 show at the London venue.