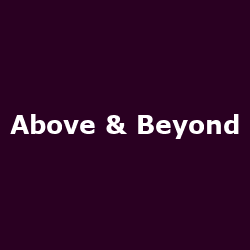 Pete Tong adores them and so do many clubbing punters up and down the land - but who the heck are Above & Beyond? If you're into hefty progressive-trance music, chances are you'll have a few releases on the Anjunabeats. Above & Beyond just happen to own that very label. If you regularly read DJ Magazine, then you'll have spotted their position in the tome's annual Top 100 DJ Poll - #5, to be exact. If you also happen to own 12" singles by artists such as Armin van Buuren, Oceanlab and even Madonna, you may own a remix or two by the trio. Clever sods, wouldn't you agree?

But as well as remixing other people's work (they even had a crack at Radiohead's "Reckoner", indie purists), they've racked-up a healthy catalogue of brain-scaring bangers for the past decade or so, including the embedded tune just above this paragraph - "Formula Rossa", a rather sexy little slice of electronic heaven, we're sure you'll agree (hands to the lasers and all that).

Not surprisingly, Above & Beyond's next tour is named after their third studio album, "Group Therapy", issued back in the summer. The tour will take in large venues, starting with Brixton's Academy on 7th April, followed by Birmingham, Leeds, Liverpool, Newcastle and Glasgow. More shows may be added in due course (there's a distinct lack of Bristol, Cardiff and Manchester action at present), but meanwhile these few will go on sale from 9am on Friday, priced at £17.50 (£20 for London).