The secret's out! The Twilight Sad announce February 2012 UK tour for new album 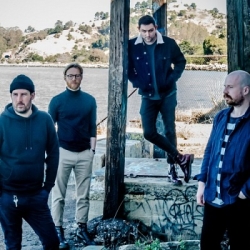 Since 2003, Kilsyth's rare rock exports The Twilight Sad have been carving a notch on the bed-posts marked 'indie-rock' and 'shoegaze', according to a few magazines looking to pigeonhole the band. In truth though, the Scottish trio probably have more in common with Mogwai and Explosions in the Sky, than Lush or White Lies.

With a reputation for blasting ear-drums apart during their live performances, James Graham ensures that his native Scottish vocals add some respite from the wall of sound that greets punters. Yet their CDs and records are a thing of aural beauty - one listen to their accomplished debut set, "Fourteen Autumns & Fifteen Winters", shows a melancholy not unlike Cocteau Twins during their "Treasure" period or My Bloody Valentine circa-"Loveless", the latter being a fair comparative as to the volume of the band's amps during their concerts.

Album number three in 5 years will appear in 2012 - "No One Can Ever Know" is due for release on 13th February and will be supported by a UK tour which starts in Glasgow on 9th February, followed by Manchester, Sheffield, Birmingham, Bristol, London, Nottingham and finally Leeds. Ticket prices are very reasonable - expect to pay £9 (or £10 for London).

You can check out their layers of powerful sound on the single track, "The Wrong Car", issued last year (in the video player, above).