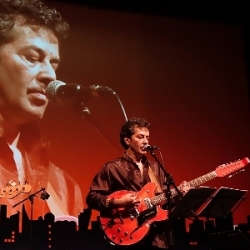 With punk safely boxed up and cast off from the shores of the UK into an abyss of one-chord wonders, the late '70s sprang into life with a veritable array of new-wave and so-called 'post-punk' operators, all vying for something more than just getting played on Radio 1's evening shows or recording a John Peel Session. Secretly many bands wanted to crossover from the indie scene to the mainstream, yet were hindered by budgets, radio-station programming or their own attitudes. That's apart from being capable of turning the odd memorable tune, every so often.

The Monochrome Set still hold a special reverence for lovers of late '70s and early '80s intelligent guitar pop a la Postcard Records or latterly, The Smiths. Rather than bang on about the state of the nation, lead-singer and chief songwriter Bid (real name: Ganesh Seshadri) chose to tell surreal stories with a flamboyance unheard of in indie-circles, which might explain their relative obscurity whilst on Rough Trade, one of several labels they trialled during their formative years.

Hoping to build on their modest yet strong following, they switched to the DinDisc imprint of Virgin Records in 1980 and scored a minor hit album with the excellent "Strange Boutique" album. They left for Cherry Red when DinDisc was wound up by its big brother, scoring a few more indie hits, namely the perky '60s-influenced "Jet Set Junta" - you can watch the original archived video on the player. Despite regrouping in the '90s for an album on Warners ("The Lost Weekend" - it nose-dived), the band have kept quiet with only Bid forming a new band, Scarlet's Well (one song, "He's Frank", was covered by Fatboy Slim's Brighton Port Authority and used in the TV series, "Heroes").

Some 15 years later and after a few more hiatuses, The Monochrome Set will return in 2012 with a UK tour during the spring. First stop will be Glasgow on 6th April, followed by Edinburgh, Birmingham, Manchester and many more until London's Dingwalls on Sunday 29th April. Tickets are now on sale ranging from just £7 (Cardiff) to £12.50. And you've got to love a band with a guitarist called Lester Square.